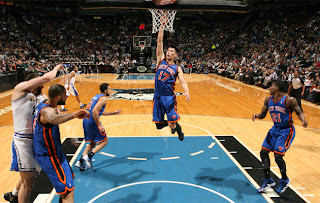 Asian Americans (and plenty of other folks) are going bonkers over Jeremy Lin, the undrafted point guard from Harvard who's become an overnight sensation for the New York Knicks. Now, Lin is not the first Asian American to become a superstar athlete; nor is he the first Asian to star in the NBA. He is merely, as the sports pages have been so carefully putting it, the first American-born player of Chinese or Taiwanese descent to play in the NBA.

Yet many Asian Americans see Lin's rise as nothing short of revolutionary. The veteran blogger Jeff Yang--whose eloquent coverage of Lin's triumph over the Lakers is a must-read--wondered on Facebook immediately after that game if "this is where everything changes." Poet David Mura posted: "Seeing an Asian American guy go down the lane and jam it? Science fiction. A little frightening how hopped up it makes me feel." More than one full-grown Asian American man reported himself on the verge of tears that night.

So what's the big deal? Sure, the spectacular rise of an unheralded "underdog," as reporters were calling Lin all week, is a heartwarming human interest story, and the fact that he's an Asian American in a sport where Asians are exceedingly rare is a novelty. But how does the emergence of Jeremy Lin as a basketball star "change everything" for Asian Americans?

To answer this question, we could do a lot worse than to look at a 2007 comedy called Ping Pong Playa, which is about another Asian American kid with NBA dreams. It's a film that hilariously, but also quite brilliantly, shows how the fantasy of an Asian American basketball star is a parable about  the limits Asian Americans face--and about a racial masculinity that Asian Americans have historically been denied.

Directed by Jessica Yu (no relation, really), Ping Pong Playa is the story of Christopher Wang, a young Chinese American man from California who, like Jeremy Lin, dreams of being the first Chinese American in the NBA.  Chris's aspirations make him a misfit in his comically model Asian American family: his parents run a ping-pong academy and shop, and his older brother is (of course) a doctor.  Chris, in contrast, is a slacker who can't hold down a job, and whose swagger, slang, and hip-hop style (he insists on being called "C-Dub") make him a seemingly bizarre spectacle to his parents and their friends.


Most of the movie's humor flows from the idea that its premise is inherently absurd: it's just ridiculous for an Asian American to want to play professional basketball. Why? Well, we're just not built for it. Andrew Leonard of Salon reminded us of this in hitting one of the few sour notes on the rise of Jeremy Lin, calling him "a triumph of will over genetic endowment." Translation? Asians are short. As C-Dub puts it in the opening scene of Ping Pong Playa:


People think that sports is fair, you know, just 'cause it got rules and stuff. You know, but is it fair that, you know, Chinese people are short or, you know, we have fewer fast-twitch muscles in our legs?

C-Dub uses his "genetic disadvantage"as an excuse for his failures, but the truth is starker: he's got no talent anyway. That's hammered home in a humiliating scene in which C-Dub's African American best friend arranges a pickup game with a group of middle-aged African American men. These "geezers" proceed to destroy C-Dub on the court:
C-Dub's shots are blocked, his dribbles are stolen--worst of all, he even gets dunked on. Check out the angle on that first shot: it's as C-Dub is being looked at from above, cowering in fear at his opponent's intimidating glare. The message is clear: on the court with real players (who are all black men), C-Dub can't compete. Too short, too slow, no game. Asian men can't jump.

C-Dub isn't just faking it on the basketball court. His style (always wearing a basketball jersey) and speech are also interpreted by other Chinese Americans as a racial masquerade. His mother's friends whisper about him as "the one who talks like a black person." It comes up again in an argument with his father:

Father: Dog! [In Chinese] This is what I'm talking about! You call your father a dog? Why do you always talk like a gangster?

Well, that's what the subtitles say; C-Dub's father is literally saying, "Why do you talk like a black person?" So whether it's on the basketball court or in everyday speech, this is C-Dub's central comic flaw: he is pretending to be black.

I'm reminded here of a passage I often teach to my students from Frank Chin's provocative 1972 essay "Confessions of a Chinatown Cowboy," in which Chin recalls taking as his schoolboy models of masculinity "bad blacks and bad Mexicans," since as a Chinese American he had "no manly style of my own":


They had a walk, a way of wearing their pants on the brink of disaster, a tongue, a kingdom of manly style everyone respected...There I was, hair held up high and back with Tuxedo wax, edges of hair by my ears turned down and shaped into fake sideburns and spit curls, toothpick in my mouth, pants low, belt buckle on my hip, and black-and-white basketball shoes...copping another man's flash.

Like C-Dub, Chin discovers his masculinity is a pose, copied from those--primarily African American men--who truly own it.

C-Dub eventually redeems himself through a reluctant embrace of a more culturally "appropriate" sport--ping-pong--when he enters a tournament in place of his injured brother. For C-Dub, becoming a ping-pong player is at first a humiliating capitulation to stereotype--right down to the embarrassing short-shorts his father gives him to wear--but he eventually infuses his game with his own style, making his entrance for the championship round in a basketball jersey and to a hip-hop beat on the soundtrack.

What Ping Pong Playa shows us is that the basketball court is a proving ground for a certain kind of American masculinity--one that is pretty much owned by African American men. And in its clever, lighthearted way, it tells us that Asian Americans can't compete there--that they best find more appropriate avenues for proving their manhood. It's probably no accident that another contemporary film of Asian American youthful angst--the drama Better Luck Tomorrow--also features basketball frustration, as the high-school protagonist turns to a life of crime after being denied in his basketball aspirations.

So what does all this tell us about Jeremy Lin and why Asian Americans are obsessed with him?

Well, in some ways, Lin is less like C-Dub than like C-Dub's older brother--a model Asian American boy-next-door. He is the son of immigrants, excelled in academics, and graduated from Harvard. He's humble and self-effacing, deflecting attention from himself and heaping praise on his teammates and coach. He's a devout Christian and a "testament to perseverance and hard work." In some ways, he looks to be every inch the "model minority."

And yet...he also does this.
In Ping Pong Playa, getting dunked on is the ultimate humiliation for C-Dub. But here's Lin, dunking on the guy who was the No. 1 draft pick in the year that nobody drafted Lin. On seeing this, most people's reaction was like that of Lin's teammate Tyson Chandler: "I didn't know he could dunk." To which Asian Americans responded with glee, "Yes, AN ASIAN GUY CAN DUNK."

I think what many Asian Americans respond to in watching Jeremy Lin is not the stellar numbers or the winning streak. It's the body language, the way he moves and carries himself on the court. He doesn't just defer to others, hang back waiting for a shot or pass the ball around. He attacks the basket, directs the offense, gets in opponents' faces. He's fearless. And he celebrates with his whole body, without restraint or self-consciousness, and with a touch of mischief. 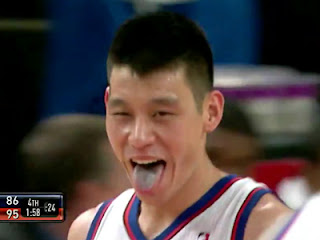 What we see in Lin is someone who can go toe-to-toe with basketball's best, not just in ability but in his whole way of being. His earnest humility doesn't stop him from strutting a little after hitting an incredible shot. What might seem like a pose for someone like C-Dub feels utterly natural for Lin: he might have needed a lucky break to get his shot, but on the court his body language tells us he's apologizing to no one for being there. 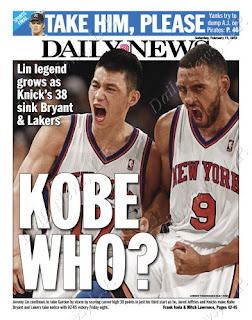 Lin is electrifying Asian Americans because he's telling us that Ping Pong Playa is wrong. In a culture where Asian American masculinity has been deemed nonexistent, Lin is rewriting the script. There's a reason a number of Asian American pundits have begun comparing Lin to Bruce Lee, another Asian American who revolutionized our culture's image of Asian men. Let's put it bluntly: Lin can perform on a stage filled with powerful African American athletes, stand shoulder-to-shoulder with them (and even outplay them), yet remain utterly himself and comfortable in his own skin. There's nothing fake, nothing posed in his persona on or off the court. Somehow he combines things widely associated with being Asian American--hard work, selflessness, intelligence, piety--with a physical presence and confidence we've never seen before in the public arena. It's not a surprising combination to anyone familiar with younger Asian Americans--Jeremy Lin may well be what our future looks like--but it is utterly, exhilaratingly new on the American scene.

Great breakdown, Tim, and love the closing. It will be fascinating to see what the long-term for all of this is. :) Hopefully in many other endeavors, Asian America will continue to step forward and change ideas of who can and can't be what. :)

Thanks for the commentary, Tim -- I agree with your statements. And you know, I had forgotten about "Ping Pong Playa," thanks for making the comparisons. Great piece!

I am a black a American, but when I see J-Lin play basketball, I feel happy for him. May he remain healthy and successful in the game. If he does, he will do for basketball players what Muhammad Ali did for boxers--there will be million$ available in the Asian market if one of their own is spearheading the expansion there.

———— SEXY ♥ ———— BEAUTY ♥ —Dubai indian escortsSO HOT ♥ ———NEW—— IN ——UAE♥ ———
I’m here to make your day more enjoyable, relaxing and unforgettable…. I am confident, secure, fun loving, down to earth cutie!!! I go out of my way to make sure our time together is enjoyable and wonderfully memorable.
EXTRAORDINARY indian escorts in dubai whatsap & Call +971501948716
Welcome to model escorts exhibition in We are the best office of escort Services in Dubai. We serve model escorts and in addition high schooler model. On the off chance that you might want to go through some extraordinary minute with our model from your bustling time, see our model escorts display.

ipl 9 live score said...
This comment has been removed by the author.
5:14 AM

http://livemnc.com is one of the best cheap web hosting services provider company in India. We have wide range of web hosting plan suitable for your business.
Address ~ 200, BASSI, Near Agra Road, Jaipur~05, Rajasthan India 303305

The post is absolutely fantastic! Lots of great information and inspiration both of which we all need! Also like to admire the time and effort you put into your blog. For more info visit.
Ac Repair in Jaipur
Ac Installation in Jaipur

Asian Americans are going bonkers over Jeremy Lin, the undrafted point guard from Harvard who's become an overnight sensation for the New York Knicks. Lin is electrifying Asian Americans because he's telling us that Ping Pong Playa is wrong. In a culture where Asian American masculinity has been deemed nonexistent, Lin is rewriting the script.
May 2019 Calendar Printable

Our Technicians doing repairs and all AC Repairs Service like ac repair, Ac AMC In Gurgaon .

For any kind of query - www.cityservicehub.com