It's a black thing. You wouldn't understand

It's a language thing. Let me explain.

There is a whole raft of things to say here about how the label "language poet" might or might not resemble the label "woman poet" or "black poet," but you'll just have to wait for the book on that one.

Meanwhile, I guess my T-shirt would have to say

It's an Asian thing. I would explain, but I don't speak English.
Posted by Unknown at 12:22 AM 5 comments:

Posted by Unknown at 5:42 PM No comments: 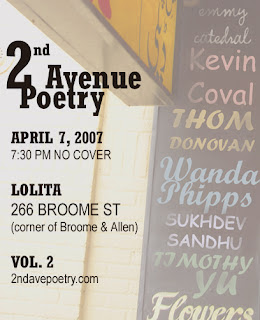 Posted by Unknown at 3:56 PM No comments:

I've got a few poems up in the March issue of Concelebratory Shoehorn Review, edited by Maurice Oliver. They were originally written as postcard poems in correspondence with Del Ray Cross back in July 2003.

I've been publishing a number of these poems in various places the past few months, and there's a weird nostalgia around them for me: I'm just realizing that they were written during my last month in California. There are some Stanford poems ("White Plaza"), San Francisco making an appearance as "The City at the End of the Rainbow," and glimpses of Chicago from our apartment-hunting trip ("The Magnificent Mile," in Seven Corners).

Adding to the time-warp feeling is that I've just completed my first round of postcard poems in several years--this one a sort of round-robin with my old poem-swap buddies Del, Stephanie, Cassie, and Jennifer. The postcards seem realer and more appropriate now that we're scattered (Cassie in Rochester, NY, me in Chicago or Toronto or wherever), opening up all kinds of possibilities for mishap (a few of Stephanie's postcards took a detour through Canada, and one of Jennifer's arrived with most of the pasted-on poem peeled off, creating an unintentional though interesting fragment), but also less immediate and conversational: sometimes a poem I'd send up the bay would arrive the very same day, while here I can wait a week for one. But opening the mailbox and having poems fall out is still worth it.
Posted by Unknown at 8:38 PM No comments:

I'm the featured poet this week in the Chicago-based blog journal Seven Corners, edited by Steve Halle. (Warning: the photo of me looking relaxed and summery can be blown up to an alarmingly large size.)
Posted by Unknown at 4:41 PM No comments: