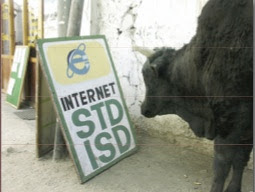 If you're a poet who blogs (or someone who blogs about poetry), I'd love to have your input on a talk I'm giving at a conference next Thursday here at the University of Toronto. The conference is on "Markets" and is being sponsored by the Centre for Diaspora and Transnational Studies. (Full program in PDF can be found here).

I proposed my topic a long time ago, so you'll have to forgive that it's based on a rather ancient comment from the POETICS list, from about four years back, to the effect that "blogs are shops, while the list is the public square" (or, in another incarnation, "the list is the Forum, the blogs are the Boutiques"). My interest is less in the particulars of the good old Poetics list vs. blogs debate than in the commercial metaphor that's in play here, suggesting the blog as an attractive but isolating and potentially commodified space for poetics.

So my primary interests in the talk are:

--what kind of space the blog is vs. other print & electronic media for poetry (books, journals, listservs, etc.)
--what the relationship between the poetry/poetics blog and the market for poetry (and criticism) is
--whether the blog form (as I hypothesize) has provided new spaces for women and poets of color that have historically been absent in other forums for discussions of poetics

Here's where I'd love to have your help. If you have thoughts on or around any of these topics, I'd really like to incorporate them into my presentation, where I'll be showing various websites and blogs and talking about the kind of economy created among them. But it would be great to hear not just from me but from a spectrum of bloggers on this topic. So if you would be interested in putting up a post on your blog around these issues sometime in the next week, I would (with your permission, of course, and giving you proper credit) try to display some of your comments during the course of my talk.

Please feel free to participate or not participate in whatever manner you see fit; I'll be very grateful for any contributions to the discussion. If you do post something, drop me an email so I know to look for it. Thanks!
Posted by Unknown at 6:15 PM No comments:

So there we were, three Americans in Toronto on Tuesday night, watching MSNBC streaming on a Mac desktop monitor and each of us with laptop open on our laps and hitting refresh on our browsers. Nerds.

I knew I'd be obsessing about the Super Tuesday results, but it's not like you can go to a Canadian sports bar and demand that they put on CNN. So why not have company? Add that we're all basically Obama fans and we were biting our nails until 1 a.m.

How did things look from north of the border? Pretty much the same, although it did mean that we couldn't switch away from Chris Matthews when he was getting too annoying (although I gotta say he was pushing the idea of Obama's "unstoppable" momentum pretty hard). I guess everything did feel slightly more abstract and distant, and I didn't get the thrill of walking into my Hyde Park polling place in Chicago and hoping that maybe I'd run into Obama voting--I had to be satisfied with adding my absentee vote to the Illinois landslide. (A home-state comparison: Clinton beat Obama in New York by 17 points. Obama beat Clinton in Illinois by 32 points. Actually, it's even worse if you really think about it: Clinton's real home state is Illinois. She grew up in the Chicago suburb of Park Ridge.)

Obama's apparent strategy--concentrating on a large number of smaller states where a modest investment of organization could produce an overwhelming victory, while relying on national momentum and exposure to keep him close in the biggest states--worked brilliantly, producing 13 states won to Clinton's 9. It's funny to see how this got spun in various outlets, and how it looked like we had a different "winner" depending on how the information was presented. The Obama folks must have known quite well that Obama's run would look extremely good on TV, and it did: MSNBC kept putting up a list of states won by each candidate, and Obama's got so long it had to be written in a smaller font.

And what about delegates? The immediate spin in news outlets of Tuesday as a (very slight) Clinton win was based on the idea that she had won the biggest states and had eked out a tiny edge in delegates. But all the most recent estimates of delegates actually won on Super Tuesday --not including, in other words, unpledged superdelegates who can do whatever they want--suggest either a tie or an outright win for Obama. The Obama campaign estimates an 845-836 win; yesterday's AP estimate was that Obama had a 546-542 edge; and CBS projects a tie at 715. (And CNN currently gives Obama a 635-630 lead in pledged delegates over the entire primary season.) The Clinton campaign's response to this is to assert that "Hillary continues to lead Sen. Obama in the race for thousands of delegates and superdelegates nationwide"; including superdelegates in the claim suggests that Clinton does not dispute that Obama may have won more pledged delegates. Thus there has been no direct rebuttal to the claim that Obama won more delegates on Tuesday.

Well, of course, it doesn't seem to be that simple. Check out that New York Times headline: "Obama Is Making Inroads, but Fervor Fell Short at End." The NYT's coverage has been nothing short of schizophrenic, alternating worshipful rock-star coverage of Obama with dutiful recitations of Clinton-camp spin. But the sense that Obama somehow "fell short" Tuesday seems to be shared by a lot of Obama partisans too, if the long litany of "is disappointed" in my list of Facebook status updates today is any indication. How is it that Obama backers could be disappointed when their candidate won every state he was reasonably expected to and then managed to pick off a couple (Missouri, Connecticut) that he wasn't supposed to?

One word: California. The fantasy that Obama might somehow win California--stoked by one lousy poll--transfixed everyone, but no one, I think, so much as early Obama adopters who thought that California, of all places, would ultimately "get it" and join the Obama movement. I think this is less a reflection of California reality than a sign of the role California plays in the liberal imagination: as the ultimate open-minded, forward-thinking, progressive haven, a beacon for the benighted heartland. (This also accounts, to my mind, for the inordinate emphasis placed on Clinton's unsurprising win in Massachusetts, which is, in the liberal [and that includes the media's] imagination, the seat of good old Northeastern liberalism, represented by the Kennedys. Never mind that it is also the home of Mitt Romney.) Not winning California jolted a lot of Obamaites, I think, because it made them realize that many of the voters who they think of as their party's base remain unconvinced by Obama.

In this case, it's the heartland--and, to a lesser degree, the South--that seems to "get it" when it comes to Obama: Iowa, Illinois, Missouri, Kansas, Minnesota, South Carolina, Georgia. And I think that's a good thing: it's these places, not California or New York or Massachusetts, that are going to be the battlegrounds in the general election, and Obama's shown he can win there.
Posted by Unknown at 9:21 PM No comments: